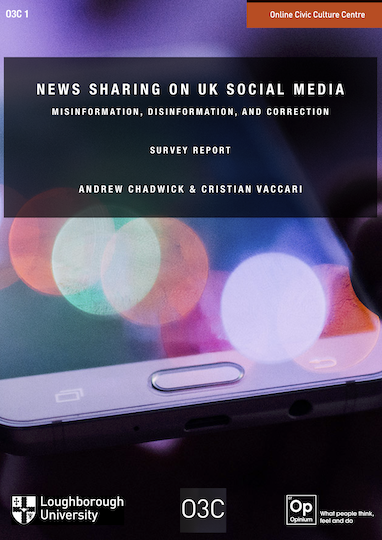 Very little is known about the motivations that drive people to share political news on social media and how these might be contributing to changes in our online civic culture. If we can learn more about the things people try to achieve when they share news online—and the extent to which these motivations might reinforce or undermine the distribution of false or misleading information—liberal democracies can start to think about how they can reduce important online harms. This report is the first to address these issues in Britain on the basis of a survey of the news sharing habits on social media of a representative sample of the British public. It was authored by Professor Andrew Chadwick and Dr Cristian Vaccari. We gratefully acknowledge the support of O3C data partner Opinium Research, which provided its survey services pro bono.

To answer these questions, we designed a survey and asked Opinium Research to administer it to an online sample representative of the UK adult population, based on key demographic variables such as age, gender, and region of residence. 2,005 respondents completed the questionnaire between July 5–16, 2018.