Sage Open, an interdisciplinary open access journal, has recently published an article, coauthored by myself and Augusto Valeriani, in which we explore the relationships between different forms of online political talk and different modes of political participation across seven Western democracies. We have written this paper for a special issue, currently under development, edited by Pablo Barberà that will present research on social media and politics by members of the SMaPP Global Network, a great interdisciplinary initiative sponsored by New York University that I am honored and grateful to be part of.

In the article, we distinguish between online political talk that occurs on social networking sites (SNS) (such as Facebook, Twitter, and Instagram), where users interact with broad audiences across public, semi-public, and private spaces, and mobile instant messaging services (MIMS) (such as WhatsApp, Facebook Messenger, and Snapchat), where users interact with narrower audiences in mostly private spaces. We also distinguish between institutional political participation, which occurs in and around the structures of representative democracies (elections, parties, and public officials), and extra-institutional participation, which occurs outside of the representative circuit and involves protest repertoires. Finally, following Samuel Huntington, we distinguish between established democracies (Denmark, France, United Kingdom, and United States) and “Third Wave” democracies (Greece, Poland, and Spain). The key theoretical difference for us is that levels of political trust are generally higher in established than in Third Wave democracies. 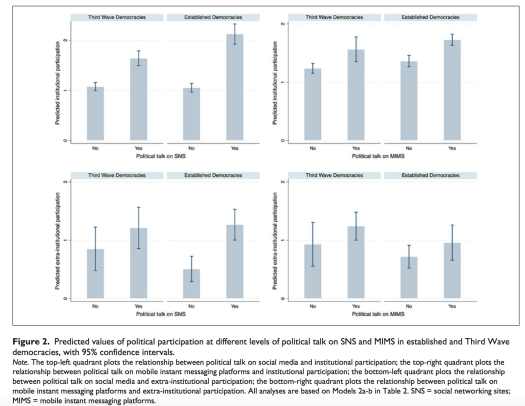 As we discuss in the article, there are three key take-away points from this study. First, online political talk is a relevant piece of the puzzle of political participation. Secondly, technologies and their affordances matter, as different types of online environments create better or worse opportunities for types of informal political talk that may be conducive to participation. Thirdly, institutional legacies shape the relationship between online political talk and participation, which is stronger in high-trust, established democracies than in low-trust, Third Wave democracies. Thus, we argue in our conclusions, “technology interacts with
individual predispositions and political institutions—including the legacy of those that are now history—in shaping political outcomes.”

Here is the full citation and abstract: